Evel Knievel I Believe In…

The Woman at the Well

We had a Sunday school lesson this week on the woman at the well (John 4, the Bible).

I have heard the story approximately 160 times, if not more. It’s a popular story.

A Samaritan woman, a woman who by birth was less then because of her race, was an evil awful sinner and Jesus still spoke to her.

She goes out to get water at the well when no one else is there (usually women go to the well together), Jesus is there alone and asks her for water.

My husband, always trying to get a rise out of me, nudged me to say, “Women’s work, haha”.

But that was my “aha” moment.

Women, especially in Biblical time, had no rights.  As in – none.

So this woman, married five times, had been “sold” five times.  She didn’t pick her husbands, she was chosen for them.

What made them turn her away five times?  Death?  Divorce?  It doesn’t say.

But it does say that she was living with a man not her husband.

And it does not say a word about her children.

Now, I have a very vivid imagination.  It gets me in all kinds of trouble and it takes me  on all kinds of adventures.  But just suppose…

Suppose the woman is married off to a man and she produces no child.

So he divorces her.

If she felt less than at all, she feels the scum of the earth at this point.  Why is she unlovable?  Why is she cursed?

A woman who no man wants when a woman depends on a man for survival.

A woman with children had children to take care of her when her husband died. It does not say at all that she has a child.

But she is living with a man that is not her husband.  Are they lovers?  Or does he care for her in pity?

Either way, she knows she is undesirable.  She does not travel with the group of woman to get the water.  She is an outcast. 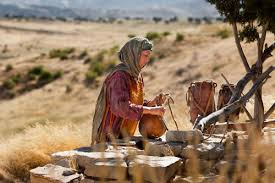 Woman at a well.

At least, that is what we guess because it does not say that in the Bible.  It does not say she is a prostitute either, and I have always been taught she was such a woman.

Jesus sees right to the heart.  He tells her he has living water.

And I nearly cried as it dawned on me…

Her soul was parched. She was dying for living water, for healing on her parched soul.  She was less than the less, an undesirable.  But didn’t she matter at all?  Didn’t she cry out to the darkness, “am I so unlovable? Is there nothing else?”

And then, keeping away from the women she would know by name because she has lived with them in the village all her life (no secrets here) to keep them from disgracing themselves to be seen with her, she travels alone to a well to gather water for herself, a man not her husband and no child.

It is not custom for a man and woman to speak as Jesus spoke to her.

But what did she have left to loose?

And how desperate she must have been!

In other scriptures, they talk of stoning a woman in adultery   They turn their backs on the “less thans”.  But they listened to her.

Not only did they listen to her, they believed her.

They believed her so much they followed her to go meet Jesus.

Jesus, the same Jesus who has 12 disciples with him at all times but He tells her, “I am the Messiah you wait for.”

What is her heart that He should tell her?  That He makes sure to answer her hearts cry?  To offer the ultimate gift to her parched soul.  Her thirsty for more soul.

My soul thirsts for more, does yours?

Jesus answered her heart cry, a woman that society would scorn.

Why wouldn’t he answer your souls cry?

This, this was brand new to me.  This seemed to leap off the page of my Bible at me…

21-23 “Believe me, woman, the time is coming when you Samaritans will worship the Father neither here at this mountain nor there in Jerusalem. You worship guessing in the dark; we – worship in the clear light of day. God’s way of salvation is made available —-. But the time is coming—it has, in fact, come—when what you’re called will not matter and where you go to worship will not matter.

23-24 “It’s who you are and the way you live that count before God. Your worship must engage your spirit in the pursuit of truth. That’s the kind of people the Father is out looking for: those who are simply and honestly themselves before him in their worship. God is sheer being itself—Spirit. Those who worship him must do it out of their very being, their spirits, their true selves, in adoration.”

I am not a Bible scholar.

I am not even any sort of teacher.

All I have to go on is what I heard in Sunday school, what struck me, and me reading the scripture over and over during the Sunday service when (yes, I know I should have been listening to the pastor).

Nothing has spoken to me as much as this in so long.

I just could not let it go.

This passage was water for my thirsty soul.  I just wanted to share it with you as well.

One Response to The Woman at the Well