Surprise! We Are Gonna Have a Baby!

By life4boys On March 12, 2012 · 2 Comments
Friday, after our adventurous day at work, I returned home and got the mail.
I received this box. 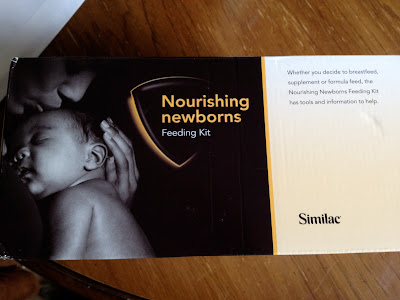 Apparently Similac has heard we are expecting a new baby.

Which is as much news to me as it is to you…..and to my husband.

My husband who had not yet seen the box.

And my evil plan was birthed.

At the dinner table, I set the box on his plate, covered it with a dish towel (remember my post about getting remarried? Yah, here is one of those un-photographed dish towels, much to my embarrassment.) and waited for his arrival home. 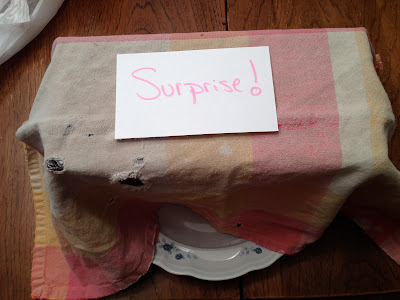 I giggled with anticipation all night because, well, I have a rather vivid imagination and I could imagine his reaction.

It was going to be grand.

The fact that after S4’s arrival we made sure that there was NO way we would have another bouncing baby boy added to my hilarity.

Well, that and it had snowed that day so I may have gone from depression over the snow to giddy at hearing it may reach sixty degrees on Sunday.

I wanted S1 to video his reaction.  S1 did not understand my silliness.  He assumed it was because Daddy hated the taste of whatever the drink was in the box.  This made me laugh even more.

When my unsuspecting husband walked in, he seen the dinner plate and smiled big.  He loves to get surprises. I was nearly jumping up and down at this point.

He lifted the towel before S1 could get the camera.

“What in the world………” was all he could mutter.

His face was one of shock.  And then confusion. And then he looked at me as I began laughing hilariously.  “Similac thinks we are having a baby!” I laughingly explained.

Not quite the huge reaction I had hoped for but fun all the same.

But all night he would say, “Can you imagine having another one now?”

To which I would shake my head and say, “No.  No I can not imagine having another.”

This story was made even better because Sunday we found that our friends from church, Wes and Karen, are having Baby #16 in October.  Yes, they are all theirs.  There is one set of twins, a zillion boys and four girls (2 of which are the twins).

I think I will give the similac to them because we so do not need it.

2 Responses to Surprise! We Are Gonna Have a Baby!