Where Are The Stars? He Stood Up For His Values

I mean, after acting half crazed this afternoon and barking all evening and then barking insanely much around eight thirty pm, my dog was driving my crazy.

My eldest, after seeing that his mama was about to have a meltdown because it had taken he and his three  brothers TWO HOURS to clean the living room (that wasn’t even that messy, I know that is hard to believe, but it’s true) he took it upon himself to clean out the kitty litter.

That’s how I know he knew he needed to do something grand to make sure I knew he had heard me.  No one likes to clean kitty litter.

He came pounding back up to the house, burst through the door, uttered the word “Opossum” and headed straight for the gun cabinet.

We have an all out hate of the opossum animal.  You may have read about my dramatic war with one in the Praise and Coffee Magazine in Spring 2011.  Earlier this year an opossum snuck into our chicken coop and killed my most favorite chicken, Holly Hoppie. 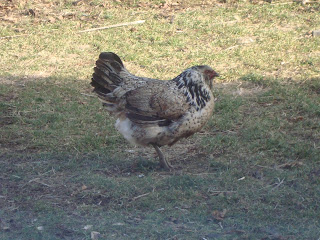 She could only hop on one leg, her other leg was non working.  We returned home one night from church and heard Holly’s death cry.  The boys and I cried for days.

He got loaded up and with S2 at his side, the stormed outside to protect our girls – our chickens.

S3 and S4 stood on the porch…one was wearing jeans, winter boots and a tshirt.  One was wearing undies, a tshirt and bare feet.  The stood perfectly still to wait for the death shot.

The nasty opossum was in our SHED.  The shed I spoke of last night that is stocked with ice cream. In this shed also sleeps chickens…they don’t like to be far from the ice cream either.  They know that’s where the good food is.

I had been in that shed TWICE that very afternoon.

Whether I was in there for ice cream or not I do not need to say.

At this moment, with two boys standing on the porch clinging to each other, with one son running around with a flashlight and one son loaded with a gun and a dog barking insanely much, my husband pulled in the driveway.

He was told by four excited boy voices what was going on.

He grinned as he pulled out his gun and went to join the boys.

The opossum was shot.  My husband informs me I should be nice and not put the picture on the blog.  I think of Kellyn and how she still goes on and on about the boars head post.

Then I thought of Kellyn and how she went on and on about the boar’s head so I just texted the photo to her.  She was stuck in a meeting last night, she needed the photo.

Becca tells me she is not interested in the tail being sent to her either.

But here is the information I will give you about the nasty opossum that was attempting to kill my chicken and then steal our ice cream.  S1 is (gasp!) two inches shorter than me (DO NOT tell him I admitted this fact) and that opossum was as long as his waist to his boot.

Not a one of us have ever seen such a huge monster.

It was such a great shot that my husband said we could eat it for dinner.  NO WAY!!!!

i am thankful for my boys who protect the girls – the chickies and their mama….

One Response to Protecting the Girls